Uma Thurman Blows Up at Reports at Custody Hearing 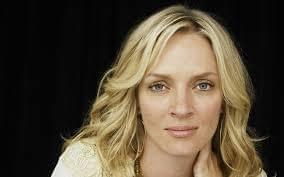 “Kill Bill” actress Uma Thurman unleashed her fury at reporters Monday, saying they should be banned from court after a hearing in her child-custody battle with her ex, hedge-fund executive Arpad “Arki” Busson.

“The press doesn’t belong in Family Court,” Thurman fumed, although she was actually in Manhattan Supreme Court, three blocks away from Manhattan Family Court.

“You should respect people’s privacy,” the Golden Globe nominee added after slipping on a pair of black sunglasses.

“Thank you. Goodbye,” she snapped, pointing toward the exit.

Busson, 52, hauled Thurman, 45, into court so he could spend more time with their 3-year-old daughter, Luna.

The London-based multimillionaire received permission from the judge to call into court on the telephone, while Thurman had to attend in person.

Thurman and her two lawyers met privately with Justice Matthew Cooper and Busson’s lawyers for about an hour.

They emerged from behind closed doors with a temporary settlement.

Cooper praised the two sides for putting their daughter’s well-being ahead of their differences.

“I’m very pleased that we were able to resolve the immediate issue of parental access with the child and everybody has acted in a good, cooperative manner and certainly in a way where I’m struck by how concerned both sides were for the best interests of their daughter,” Cooper said from the bench.

The judge continued to compliment the “Pulp Fiction” star and her ex, who was on speakerphone.

“I commend Ms. Thurman and I commend Mr. Busson for flexibility, for being able to accommodate one another, but most of all being able to take their daughter’s needs first and foremost,” he said.

“The immediate issue before me has been resolved. We will meet again to work out an ultimate parenting plan,” he said.

The nature of the conflict was not clear, as legal documents involving child custody are sealed, although related court proceedings in both Manhattan Supreme and Manhattan Family courts are public.

Outside the courtroom, Thurman’s assistant apologized to the press, telling reporters that her boss is “very sensitive” about “personal matters” involving her children.

Thurman, who called off her engagement to Busson in 2014, also has two children with ex-husband Ethan Hawke.